I can barely read this article without yelling at the computer. I keep seeing things like this:

"The influence of the church was a major factor," Binder said. "The religious aspect tended to win over concerns about discrimination."

The religious aspect tended to win over concerns about discrimination BECAUSE THE NO ON 8 CAMPAIGN ROLLED OVER AND LET THAT HAPPEN. I fully believe that there were strong, effective ways to counter the religious arguments, but the no campaign never went anywhere near that territory.

By bringing in professional consultants and making the campaign more about politics than the needs, stories and enthusiasm of the lesbian, gay, bisexual and transsexual community

And I would argue that the problem was just the opposite-- the campaign pandered too much to the needs, stories, and enthusiasm of the GLBT community, while completely failing to respond at a political level. The No on 8 campaign was completely and utterly about preaching to the choir, while failing at the most basic level to deliver a convincing message to the undecided voter.

The No on 8 campaign completely and utterly failed in basic strategy-- assessing the opposition and countering it effectively. I'm sure they also failed on the grassroots side.

Frankly, I'm sad that I donated money to this limp noodle of a campaign, and furious that it was spent in such an amateurish way.

And now we're seeing things like http://gettoknowusfirst.org/ -- feelgood fluffy bunny stories that appeal to sweater-wearing fags and that's about it. Bah. 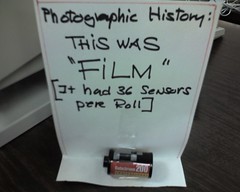 What is this film thing you speak of?
Originally uploaded by whipartist.

I spotted this at Keeble & Shuchat yesterday, after venturing upstairs to the scary area of the store where they have weird bottles of chemicals and stuff.