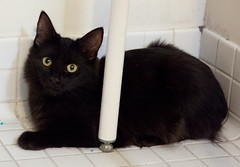 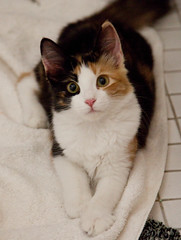 There is continued progress on the kitten friendliness front. They've taken to sleeping in the middle of the room, rather than hiding in a corner. They're both pretty playful, although it's clear that she's more sedate than he is. They're both willing to let me pet them so long as I come to them for it, but he's more snuggly about it than she is. They both have rolled over so that I could scratch their bellies.

They still spook easily, but they're getting better. The last time I went in they were both curled up on the rug, and neither one of them scampered away when the door opened-- they just stayed there watching me. It's big progress!
Collapse