Brisk five-minute warmup walk, then do two repetitions of the following:

The session always ends with a five-minute cooldown walk. I'd originally planned to repeat week two, but after my "Hi! I'm an overachiever!" performance on W2D3 (which, in all fairness was W2D3.5, since I was over halfway through W2D3 when the treadmill broke) I decided it was worth moving up.

Problem: the treadmill is still broken. Problem: I'd rather remove my left eye with a spork than run outside. Problem: I hate going to the gym.

One of those three things had to give. The treadmill ain't gonna get fixed immediately, and I'm not quite ready to be monocular, so I decided to see if I could get over my aversion to gyms. As it turns out, the real problem with gyms for me is that I'm not motivated to get past the overhead of actually going somewhere to work out-- that's why I have fitness equipment in my loft. Since I seem to have developed an unexpected and truly frightening well of motivation for this, a gym isn't quite as horrible as it could be.

I love location-based web search. There's a 24-hour Fitness not too far from me, as well as several other gyms. Somehow, though, the big national chains weren't speaking to me. There was another option, though-- there's a place called Bladium in the old Alameda Naval Air Station. I checked out their site, and they looked pretty decent. Plus, they have a 7-day guest pass. 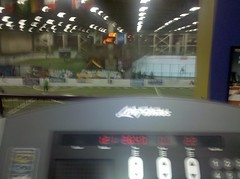 The place seems to be primarily for indoor socker, hockey, etc., but it also has a very nice fitness center and a bunch of other stuff that I really have no interest in investigating. It lives in an old aircraft hangar, and the place is absolutely huge. When I got there all of the membership folks had just left for the day, so I filled out a form and she sent me off to work out.

The club doesn't seem to be populated by hardcore hard-bodies, at least not at 8:30 on a Wednesday night. The fitness area was almost all women, and there was at least one ass that made mine look small. The cardio area overlooks the soccer fields, which I suppose would give you something to watch if you were interested in soccer. I'm not, so I'd loaded up the new phone with episodes of This American Life.

So, we've arrived at W3D1. On week 3, you start having the option of time-based or distance-based metrics. I opted for time-based, since I know that I'm sloooooowwww and I don't care to mess with that. However, at the end of the second repetition I wasn't quite ready to be done. (Is this sounding familiar?) I added another 90-second run, this time just a little bit faster than before. Though I'm fairly tall for a woman I have short legs, so my extra-fast jogging pace is a whopping 4MPH, and my normal one 3.3-3.5MPH. I'm in no hurry! Interestingly, I've found that I time my runs by counting steps, and I just use the treadmill's timer for backup. Something about the act of counting makes it easier for me.

I really like the pacing of this program. It's exactly the right level of challenging for me-- I have to work at it, but it doesn't feel impossible. I also finish up feeling less sore than I used to. My left knee still alerts me to its presence pretty consistently, but it's just background-level annoying rather than worrisome.

The 7-day pass will be good just about until the time I leave for vacation. The hotels in New York and Glasgow have fitness centers. The one in London doesn't, but there are two gyms very close by and I think the hotel may have a deal with one or both of them. Once I get back I can sort out fixing the treadmill and/or buying a gym membership.
Collapse