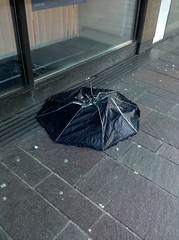 This is how I'm going to remember Glasgow-- the broken umbrella. I saw dozens of them on the streets around the city. I woke up this morning to sunny skies, just in time to head for the train station and out of town, which allowed me to catch glimpses of a lovely town, but I'll remember Glasgow as cold, rainy, and windy.

Anyone who knows me knows that I have a great love of Scotch whiskys. I generally prefer the peaty, smoky intensity of Islay malts, and Glasgow is in the lowlands. Still, visiting any distillery is better than none at all, and Glengoyne is easily accessible from Glasgow via a city bus line. It's an hour and four pounds each way, and I wasn't about to let really crappy weather get in my way, so off I went.

For five quid you get a tour of the distillery and a sample of their 10-year-old whisky, and fifteen gets you that plus tastings of their 12, 17, and 21-year-old scotches. I opted for the full monty. Glengoyne makes an unpeated malt, which is about as far away from an Islay as you can get, and I found it to be very simple-- clean and sweet, and not at all harsh. The older malts were a little bit richer and more complex, but still clean and simple. They would be good introductory drinks for people who don't like scotch.

Glengoyne is technically a highland scotch, but it's more characteristic of lowlands. In fact, it straddles the border between highland and lowland. The distillery itself is on the highland side of the road, but the warehouses where the barrels age are in lowland territory. They have pipes running under the road to get the whisky from the distillery to where it is barreled.

When I arrived, there were four other people on my tour-- students at a local university. They were there as part of a school project, doing research on women and whisky. To date they hadn't met any women who actively drank whisky, so when I walked in they felt like they'd hit the jackpot. They mostly had been talking to students, though, and I know very few young people-- male or female-- who enjoy such things when young. 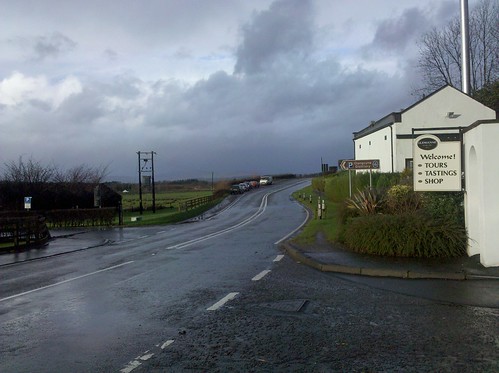 The best part of the tour was peering into the giant wash backs to see the wort fermenting. It smelled like a brewery, which is about what one would expect-- pre-distillation, there's really no difference between whisky and beer.

The cool thing that I learned is that it's possible to buy a cask when it's distilled. They'll put your name on it, and put it away for aging. You can come visit it whenever you want, and when it's done aging they'll bottle it for you with whatever labels you want. If I had a use for 300 bottles of whisky a decade from now, I might do that.

The worst part was waiting for the bus back. Apparently the schedule changed recently, and I spent half an hour standing at the gate in cold, wet, windy weather (sense a theme here?) before it arrived. The rain stopped for a moment, though, and I was able to get this photo. The bus ride through the countryside was a bit charming, and would be quite lovely in better weather. I'm not sure if that ever happens in Scotland, though.

I'm on a train to London now. Virgin trains have free wifi in first class, and the price difference between tickets is pretty much exactly the cost of paying for wifi in coach. I've been online for two hours, and thus far the service has been rock solid.

Leicester Square has been turned into a bloody carnival. No, more than usual.

Funny thing. As soon as I set foot on the tube today, I felt like I was really on vacation.