Five minutes in New York... six different people have complimented me on my hair, and I've signed a model release.

My hotel room isn't ready yet, so I went out to get breakfast then theater tickets. I stopped in the godawful yet ubiquitous coffee chain and got a scone and some juice. I found a seat in the window and sat down next to a young Korean girl and her mother.

She was utterly fascinated with my hair! Though she was shy at first, she perked up and started playing when I held out a lock of hair so she could touch it.

We exchanged names and flirted a bit, then I turned my attention to breakfast and the online world.

A few minutes later, she came over and gave me a banana. Too sweet! We chatted a bit more, then dad took a few pictures of us together.

When it was time for me to go, I stopped at the counter and bought some cookies for her. She thanked me very sweetly before we waved enthusiastic goodbyes. 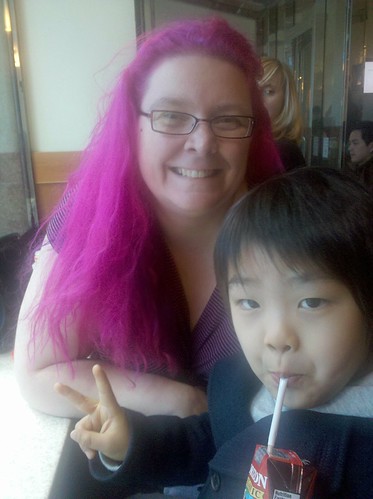 I discovered yesterday that the show I really wanted to see today is dark on Wednesdays. Sigh. We got tickets for Saturday instead, which left me with two empty theater slots today.

First up: Time Stands Still by Donald Margulies. I've been a fan of his ever since I saw the Pulitzer-prizewinning My Dinner With Friends in Berkeley several years ago. It's a fantastic play in an intense, claustrophobic way that really works well on stage. Time Stands Still is similar in a lot of ways-- it's about two couples, each going through challenges separately and together. The primary couple is Laura Linney as a war photojournalist who has just coming home after nearly being killed by a roadside explosive, and her war correspondent boyfriend of eight years, played by Brian d'Arcy James. The other couple is their editor, played by Eric Bogosian, and his new young girlfriend played by Alicia Silverstone.

It's an all-star cast, and they were fantastic individually as well as together. I highly recommend it.


It's not a cheery, uplifting feel-good play though, and I decided to counteract that with a comedy this evening. Specifically, I saw A Behanding in Spokane. It also has a stellar cast-- Christopher Walken, Sam Rockwell, Anthony Mackie, and Zoe Kazan. It's still in previews, and some of the pacing is uneven, but it's still a hilarious play.


And much as I like New York, I found a perfect illustration of why I don't want to live here. There's a giant heart sculpture here right now, made of bricks of ice. The thing doesn't even have the good sense to melt. Climates like that aren't really human-habitable, are they?
Collapse