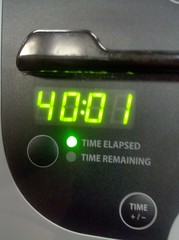 Part the first, wherein I triumph

Tonight was the last run. I was a little uncertain of it, since the last one kicked my ass, but I was totally not going to fail at this at the very end... no way no how. Just to make sure of it, I kicked two tenths of a mile off of my normal speed. I hydrated the hell out of myself before I went to the gym. Mostly, I engaged all of the stubbornness that I had.

And then I ran. There were two short water breaks, one just before 20 minutes in and one about four minutes before the end, but I would have made it without them. W9D3 is my bitch.

Water breaks were a minute total, and I made up that minute at the end with a glorious, triumphant sprint across the finish line... grinning like a bloody maniac the whole way. My heart rate did not approve of the faster pace, but it was only for a minute-- my heart can just suck it up.

Part the second, wherein the music amuses me

The last few songs of my workout tonight really cracked me up. The first one was Light at the End of the Tunnel from Starlight Express. Not only is it a fantastic finale song in and of itself, it's also great high-energy song to sprint to, and the lyrics are oh so appropriate.

The final song was I'm Alive from Next to Normal. OK, the lyrics aren't perfect, but it reminded me that I'm not ded of teh runningz.

Part the third, wherein the gods of irony sneak up and pounce on me

I walked my way down to a reasonable heart rate, then went into the aerobics room so that I could do post-run stretches. As I sat down on the floor I twisted my knee funny. Owie. Owie owie owie. I don't think it's serious, but I was definitely limping as I left the gym. How funny is it that I managed to make it all the way to the end of the couch to 5K without injuring myself running, then hosed my knee 60 seconds later.

Part the fourth, what now?

I'm going to go back to the beginning of the program and do it over, all at a faster pace. I'll probably also mix in some 20-minute runs at my current pace, just so that I don't lose my stamina.

Part the fifth, numerology and milestones

I started this crap on September 25 of last year. I fucked around for a while doing a bunch of things wrong, and actually finished W1D1 on October 20. After that I repeated a bunch of stuff, backed off for a while while I worked with my doctor to stabilize my blood pressure, took a couple of weeks off after I tried to drown myself from inside, and put myself into a holding pattern for a while after the lungs+water incident. All in all, it took me about 25 weeks to finish the 9-week program, but I'm OK with that. I was way out of shape. OK, I still am, but I'm out of shape and can run for half an hour. So nyah!

I joined a gym. I would have bet large sums of money that I would never do that. I learned that running outdoors sucks for me.

I've lost about ten pounds since I started running. My blood pressure, while still higher than it should be, has dropped significantly. I'm on much wimpier drugs for it than I was in September.

But mostly, I set my mind to doing something... something really fucking hard, in fact... and I finished it. I win.

Part the sixth, the postscript

I just sent mail to my mother. "You know mom, I've done and said a lot of things over the years that I'm sure you didn't expect, but this one's weird even for me. Hey mom, I'm a runner!"

I was right about my knee. It's not bad today, but I definitely did tweak it. Thank you, gods of irony.

courtneydisney asked about playlists for working out. Here's mine. As expected, it's very heavily skewed toward showtunes and Queen.