So in an effort to build a taller rear seat for my car, I decided to try the expanding foam thing. So really... filling the back seat of your car with a polyurethane foam that expands up to 30 times its initial size... what could possibly be wrong with this idea?

I went to Tap Plastics this morning and got a big thing of expanding foam, plus measuring and mixing containers. On the way home, I stopped at Home Depot and picked up a couple of tarps. I grabbed a couple of two foot square sheets of 1" styrofoam from my loft, and set to work.

First I taped the styrofoam sheets together and used them to form a wall against the front edge of the back seat-- they fit perfectly, and held tight when the front seats were pushed back all the way. After that, I covered the car and the ground around it with a 1 mil plastic tarp, I then lined the back seat with a 2 mil tarp for extra happy protective goodness. 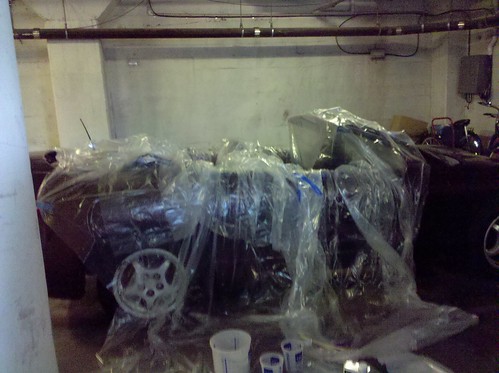 As I was lining the car, one of my neighbors came home. "Hey. What the heck are you doing?"

"You don't want to know. Trust me." He was smart enough not to press the issue.

Removing one of the childproof caps from its container required a hammer. That wasn't by design, unless their design intent was to prove your humanness by requiring you to demonstrate the use of tools-- opposable thumbs were insufficient for this task.

Having passed this particular test, I measured out about a quarter of each container, took a deep breath, and poured them into the mixing bucket. After mixing until their were no streaks left, per the instructions, the ready-to-foam mixture got poured into the back seat.

Because really, what could possibly go wrong here?

The foam expanded, but not nearly as much as I expected. OK, fine. I mixed the rest of the stuff and poured it on top of the original layer, then watched for a few minutes to be sure it wasn't going to bubble over or anything crazy.

A couple of hours later, the end result was about a two inch layer of foam across most of the back seat. On the plus side, it was exactly the right texture and density. On the other side, I quickly calculated that it would cost about $500 to get enough of this stuff. Thirty times the initial size my ass.

So that was amusing.

I have a plan B.
Collapse