Earlier this week I was lusting insanely over $40K worth of camera gear.

Today a cosmic ray stuck my brain from a completely different angle-- I decided that I needed a pinhole camera Right Now. A normal person would get some film and an oatmeal can and go to town the old-fashioned way. I am not normal, no sirree. My idea of a pinhole camera involves a scrap of aluminum foil, blue masking tape, and a few kilobucks worth of Canon camera gear.

Mine is not to question why, but merely to obey the voices in my head. I sacrificed a body cap, dremeled a fairly small hole in it, taped some foil over the new opening, and made a pinhole in the foil. Easy peasey.

I call this composition Still Life With Crap Found On My Kitchen Counter. It's straight off the camera, except that I corrected the far-too-yellow white balance. I think it's not too bad for a first effort.

I have no doubt that I would have tried the same stunt with a $40K medium format camera if I had one sitting around. :-) 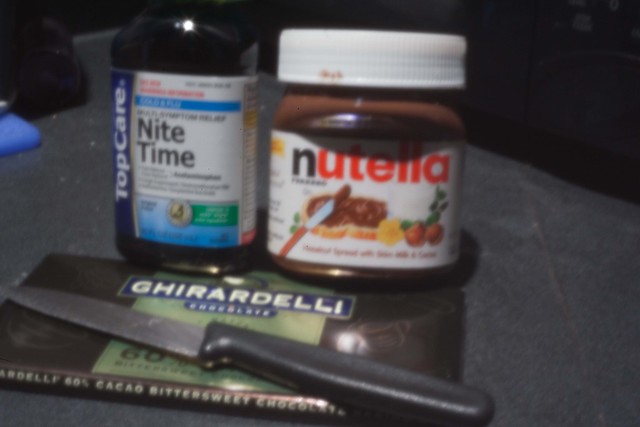 Someone just sent me a link to this picture from the pride parade. Again, click at your own risk-- I am not street legal for most situations.
Collapse