Remember when I was lusting after $40k medium format cameras? Well, I'm at a Hasselblad seminar about to play with them. This could be a biiiigggg mistake.

So I went over to the Hasselblad demo thing today. They were doing a lot of studio work with a lot of really whizbang lighting one very bored-looking model, but I talked one of the guys into letting me take one of the cameras, an H4D-50MS outside. I wasn't shooting for good pictures, but rather just to see what the quality of the resulting images was like. I took this rather boring photo: 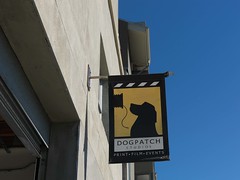 which is really quite unremarkable, except that you can see how sloppy the stitching is on the sign when you look at a 100% crop: 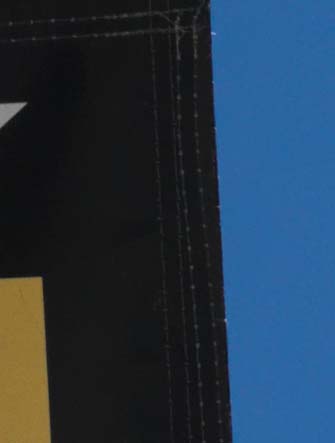 Those are straight off the camera, except that I used Hasselblad's software to convert them to a Photoshop image, then used Photoshop to make JPEGs-- no sharpening was done. The stitching lost a little bit of clarity in the compression.
Collapse