Amazon has started using a service called OnTrac for some of their parcels. I'd never heard from them before, but my first experience with them was less than stellar. They were supposed to deliver a package to me yesterday. Just before 5 p.m. I realized it hadn't arrived, went to Amazon's site, and checked the status. OnTrac claimed to have tried to deliver the package, but nobody was "home".

I called OnTrac, and after ten minutes of being on the phone they said that the driver would try to get back there by 5:30 (when the office closes) but they couldn't guarantee that. It didn't happen.

Today I checked their website, and they claim the package was delivered yesterday at 3:58 p.m. That's the exact same time that they reported that they couldn't deliver it.

My conclusion: they lied about trying to deliver it, and then lied about when it was actually delivered. 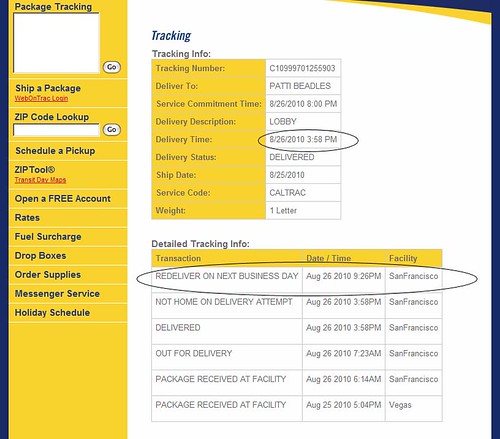