As I mentioned the other day, I'm taking a black and white film class. I've done almost no work in a darkroom, and I really want to learn the basics of processing and printing film. I don't expect to be doing a lot of it, but I do want to add an understanding of it to my repertoire.

Last week was the first class, wherein we got a brief lecture on the basics of photography (which, honestly, I could have taught), and then we were given a roll of film and sent off to shoot. The only assignment was that one of the shots had to have a gray card in it, plus a range of light and dark areas. Other than that, we were on our own to shoot whatever we wanted.

Tonight we learned how to develop film. I always thought developing meant dropping the film off at Walgreens so magic elves could do it, but it seems that you can actually do this yourself. Who knew?

The first step is to open your film and thread it onto a reel. This has to be done in absolute darkness, by feel, and lemme tell you that it's a fuckton harder than it seems like it should be. My partner and I managed to do this a few times with practice film, then we turned off the lights and got to work. It was at this point where my reel decided that it wanted to be incredibly persnickety, and every time I had the film almost all the way on the reel decided to throw the film off the tracks. OK, back to the beginning. My partner had similar difficulties.

"This is what it feels like to be a 16-year-old boy losing your virginity... fumbling around in the dark trying to get it in the slot, only to have it fall out."

Eventually we succeeded, and got our film safely ensconced (we hoped!) in the light-tight can. And then we communally measured, mixed, timed, developed, stopped, goed, fixed, broke, washed. And then it was time to take the film out and hang it to dry. I was dead nervous, since I was reasonably certain I'd gotten the film onto the spool unevenly and it was going to be half-messed-up.

I held my breath as I unspooled the film, barely daring to look down. Much to my amazement, I had images! Some of them even looked like they might be reasonably well-exposed, in focus, and maybe even composed halfway-passably. I wanted to stare at them now, but it wasn't the time. Instead, we hung our film for drying.

Amusingly, the class is seven women and one man... about the opposite of what I expected. Pretty much everyone managed to get their film exposed and developed, except for one person. You guessed it. He somehow managed not to load the film correctly into his camera, so he shot 36 exposures on no film. I felt bad for him, so I tossed him one of the rolls that I bought last weekend so that he could shoot a new roll without having to hunt for film.

And then we sat around for half an hour while waiting for the film to dry. La la la. Finally, it was ready and we got to take it out to the table to cut and sleeve it. And then we turned on the light table and looked.

Success! I even got a "nicely exposed" comment from the instructor as he walked by.


Because I'm a geek, I dashed home with the negatives and immediately threw them in the scanner. Thse are bad scans 'cause I've never scanned film before, but they're OK for show-and-tell.

Here's my first shot of the roll. I call it still life with grungy gray card, envelope, and leather cap: 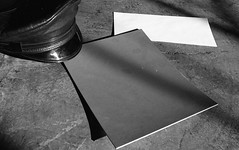 I notice that my floor looks interesting in black and white. Hrmm. I may have to explore that. I kind of like the afternoon shadows falling across the image. Oh, shush Patti... there's no artistry involved. You threw some stuff in a pile on the floor and then pointed a camera at it.

Next up is my favorite of the sugar experiments. This one turned out better than any of my digital shots: 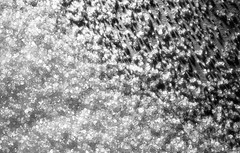 This is my favorite, and the one I was hoping would turn out. I went down to Middle Harbor Park last weekend to catch the sunset, and a woman showed up on the beach just after I did. Shortly after the sun dipped below the horizon she sat down on the beach. I caught this: 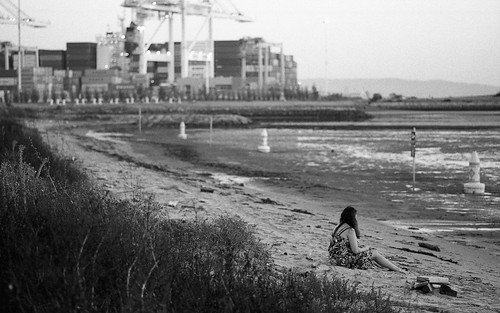 It was a difficult shot since the light was changing very rapidly and I had the camera in manual mode, but I knew what I wanted-- her in the foreground, in-focus and relegated to the corner. Your eye should seize immediately on her, then sweep along the curve of the grotty strip of urban beach until it makes its way to the cranes and the ship being loaded. I wanted the cranes and containers to be out of focus but clearly recognizable so that you would recognize them easily but they wouldn't draw your attention right away.

Next week we make our first print.
Collapse