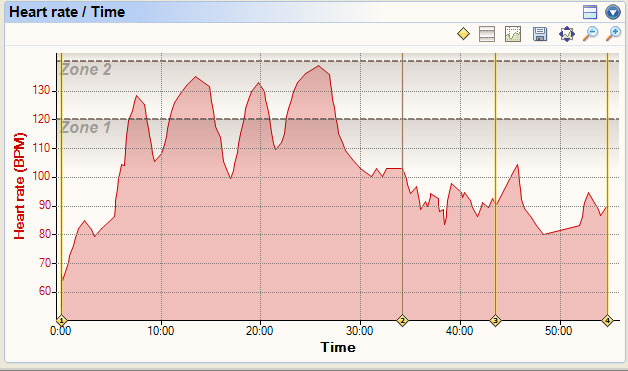 That's a graph of my heart rate as I ran tonight.

It's in three sections. Section 1 is the actual run. It went like this:

Section 2 is wandering about the gym and stretching. Section 3 is going home. As far as I can tell, that graph is pretty much exactly what I want right now. Low 140s is about the maximum heart rate that I want to see right now. The other day when I had to take a break, it's because my heart rate was into the 150s. That felt too high for me.

This is cool! It's exactly, precisely what I wanted. I ordered a Garmin ForeRunner 305 yesterday, and it arrived today. It's a little overkill for running indoors, since GPS is useless on a treadmill, but I was eyeing it last year for bicycling and couldn't quite make the case for it. It was fairly easy to set up, and it's easy to use. I approve.

And thank you to

loser_variable for recommending SportTracks. That's a slick piece of software.

The other day I posted a poll about Vegas hotels.

Amusingly, when I posted the poll, I had one answer in mind. I kept remembering things, though, and adding to the list, and when I was done there was a different correct answer. I started with 22 in my mind as the correct answer, but I'm currently at 26. I've probably forgotten something.

Binion's - about a zillion times, and I'm sad that it's closed.
Four Queens - a couple of times, including one hellish experience with two "broken" rooms, a migraine, and being right above the Fremont Street Experience
Golden Nugget - recent BARGEs/EMBARGO
Plaza - a couple of times, one while Greg Raymer won the WSOP
Main Street Station - quite frequently

Orleans - quite a lot, Orleans Opens, BARGE, TOC, and lots of just-for-fun trips
Rio - several times, but not recently
Gold Coast - occasionally when other things were booked
Boulder Station (or something out that way) - my first Vegas trip a couple of decades ago
Hilton - a couple of times, but I barely remember why

Flamingo - I know I've stayed here, but I don't remember when
MGM - with an ex, many years ago
Mirage - during TARGET once. I hate the Mirage with a passion.
Treasure Island - with a friend once. I'm not a fan.
Palazzo - after BARGE, the Venetian sent me lots of free rooms, and I stayed at both properties
Venetian - see Palazzo
Casino Royale - during BARGE at the Venetian
Paris - with my old housemates, though I don't remember how it happened
Riviera - for backgammon tournaments. I was here during an earthquake once.
Some dive next to the Riviera - got stuck here one night. It was horrid.
Stardust - I had one of the most valuable conversations of my entire life while waiting for a cab here
Sahara - once or twice during TARGET
Tuscay - while attempting to take advantage of a casino promotion

Budget Suites out Boulder - stayed here for the whole 2003 WSOP
Budget Suites by the Orleans - once, I don't remember for what
Some business-traveler-type hotel south of the airport - a friend was in town for Comdex, and suggested I come hang out with him. It was unremarkable.
Collapse