This morning I woke up fairly suddenly (and far too early) to a weird noise. It sounded like some weird broken whistling noise, and something banging on my windows. I listened for a bit, decided I was imagining it, and tried to go back to sleep.

Whistle! Bang bang bang. Whistle! Bang bang bang. "Wow, that sounds like a bird. What the heck?" I tried to figure out how a bird could have gotten into my loft. As my brain came online I remembered that I had one window open just a crack, maybe two or three inches but no more. There's no way that there could be a bird in my loft.

One more series of whistlebangs and I was out of bed to check it out. The cats were enthralled by something! I followed their gaze, and found the culprit. 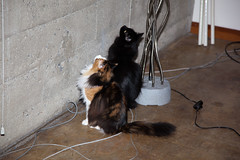 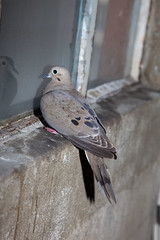 I'm not proud of this next thought. "There's a goddamned bird in my motherfucking loft." Yeah, OK, but in my defense I'm not usually awake at 7:30 in the bloody morning. However, for my next step I did what any normal person would do: I grabbed the nearest camera and started taking pictures.

Apparently this is a mourning dove. Mostly he just sat there on the window sill, but every now and then he would fly around for a few seconds, banging up against the window. He didn't seem the least bit bothered by my presence, and I was able to get the camera to within a few inches of him. 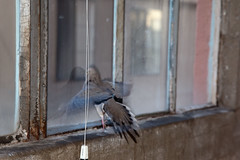 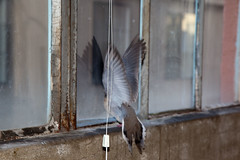 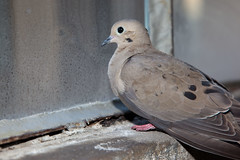 At one point, he flew down to the floor and parked there for a bit. The cats were fascinated by this, but seemed to be more curious than hungry. 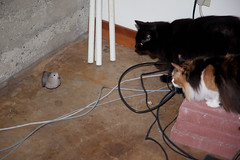 Boo wandered off shortly after that, but Peek hung out watching. She was easily distracted, though. 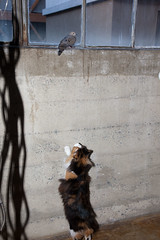 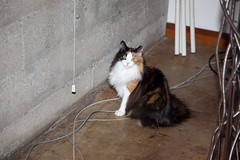 After about half an hour of my being awake, the bird found its way to the open window, flew off, and perched on the building across the courtyard. 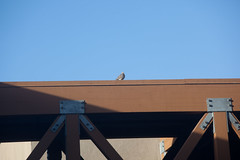