Lots of you know some of this, but some of you only know part of the story so I'll tell the whole thing.

I just got home from a week and a half in Vegas. Because I was going to be gone so long, I wanted schedule flexibility, and because I sort of enjoy it, I decided to drive down rather than flying. I had a bunch of maintenance done on my car before the June WSOP trip, including brakes, tires, and belts, so I figured the car should be up for the trip.

Wednesday morning I got the car out of valet parking to go to breakfast, and it was clearly having some issues-- I had no power steering, and the dashboard was full of glowing idiot lights. I managed to get the car away from the flow of traffic, peeked under the hood and thoguht I saw a missing belt, sent the boyfriend off to breakfast in a cab, and went up to the room to find a tow service/mechanic. I found a shop that was a few blocks from the hotel, and looked like my kind of place-- an old-fashioned mom & pop (& son) operation. I called them and they said they'd be happy to look at it right away, and if I'd like they could bring their tow truck over to get the car. Yes, in fact, I'd like.

Really, how can you not like a shop run by guys named Homer & Ron? Ron, the son, showed up quickly, loaded the car, and we headed to the shop. As I expected, it had thrown a belt. As I did not expect, my mechanic had put a belt on that was one size too big. I told him they'd just been replaced, and he went out to check the others. One of the others was also the wrong size... would I like it replaced too? Yes please. A couple of hours later, I was back on the road. They gave me the old belts, and suggested that I take them back to my mechanic at home to see what had happened. They asked me to swing by on my way out of town, so they could doublecheck everything before I hit the road.

Sunday the transmission was acting a little bit wiggy, like the clutch wasn't fully douing its clutchy thing when I pressed the pedal. Hrmm. I fretted a bit, but it didn't seem drastic.

Monday morning I wandered by the shop, had them check things, and told them what the clutch was doing. The fluid level was OK, and they tthought it might've just been the valets driving it badly, so I headed for the freeway. A few blocks later, I had a lot of trouble putting the car in gear, and when I did I drove very carefully back to the shop.

They saw no obvious leaks anywhere, but it certainly sounded like a hydraulics problem. I'd had the clutch replaced about 30K miles ago, but couldn't remember if they'd also replaced the master cylinder. I called my mechanic in Oakland, and no they hadn't. They weren't sure, but thought that was the most likely culprit, and should they just replace it? Yes please.

While I waited, I wandered down to Main Street Station to get breakfast. Both restaurants were closed until 11 a.m., so I sat down to play video poker. That worked out pretty well-- I hit a dollar royal for $4K. A couple of hours and a buffet later, the car was ready to go. I drove it around Vegas for a bit to make sure everything felt OK, then hit the road.

I'd gotten out of Vegas mid-afternoon rather than the early morning that I'd planned. Somewhere along I-5, and I still don't quite know where, I realized that I was really tired. It seemed prudent to find a place to crash for the night, rather than crashing on I-5.

This morning the clutch felt a little weird but mostly OK, and I headed home. All was well until I hit stop & go traffic in Livermore. At that moment, the clutch returned to its previous not-interested-in-working state. I surveyed the traffic, and realized that while I probably could nurse it home without a clutch, doing so in that traffic looked significantly un-fun. I'd had the foresight to get into a lane next to a wide median, so I pulled off to safety and contemplated my strategy.

First step: figure out where I was. Google maps to the rescue-- I was on I-580 west approximately here, just past 1st Street. I searched for Livermore towing, and just as I was about to call someone a CHP showed up behind me. I explained the problem, and he wanted to push me to the right shoulder rather than staying on the left. Fine with me... I got to be That Person for once. He then suggested that he should call a towing service for me, since if he does it they're obligated to be there within 30 minutes. Also fine by me. He did so, and hung out with his lights on until the truck showed up.

"How much will it cost to get me to Oakland?" I'd already done the mental arithmetic, and figured out that I'd probably prefer to pay dollars to tow the car to my shop at home rather than dealing with the hassle of dealing with a shop 40 miles away, plus the extra bonus hassle of getting home from there. The price came in at about my estimate, so off we went. 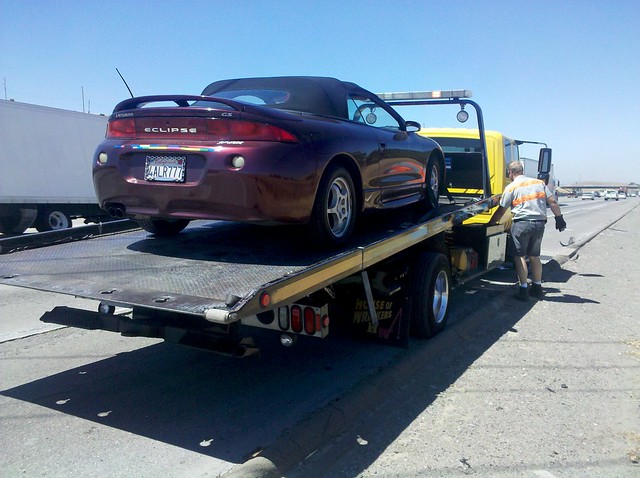 And now, three shop visits and two tows later, I'm home. At this point the whole thing has crossed over from annoyance to hilarity.

And yeah, it might be about time to start car shopping. I'd really rather keep this one a couple more years, though-- I don't really feel like I can afford a new car right now. Anyone want to leave a nice late-model convertible in my driveway? :-)

Also, I was reminded a couple of times during this trip that lots of people aren't very good at handling problems when the crop up. I don't get it... it all seems pretty straightforward to me. Deal with the immediate need (e.g. get the car out of traffic, make sure you're safe) then figure out what you want to accomplish next (get the car to a shop.) Once you've done that, you just need to figure out what steps to take to get there (ask the valet for a recommendation, use Google to find a mechanic, whatever) and do it. Why is this hard?
Collapse