This afternoon I needed to run a quick errand near my office-- it involved walking a few blocks in San Francisco's south of Market neighborhood, on a beautiful sunny afternoon. Sucks to be me, eh?

So I'm headed logical-north (which is actually northwest) on 3rd Street, on the west side, and I'm about to cross Bryant. It's a moderately busy intersection, especially as rush hour approaches, since continuing logical east on Bryant from there puts you onto the bay bridge in the carpool lane.

The light/crosswalk signal turned green. I looked left and saw that traffic was either far away, or was coming to a stop as I would expect. I started to set foot on the street to cross, but instinct told me not to. I stayed on the curb and looked around to try to find the source of my discomfort.

WHOOSH! A car flew by me in the far right lane of Bryant Street, doing what seemed like 60MPH, but probably was closer to 50. He blew through the red light, narrowly avoiding cross traffic, and flew up the street to the bridge on-ramp.

This car was at least half a block away when the light turned green. I saw him, but thought he was far enough away that he would be no factor-- he'd certainly stop for the light, especially with all of the other stopped traffic to give him a visual clue. If my lizard brain hadn't sensed him and stopped me from crossing the street, I almost certainly wouldn't be alive right now. Instead, I got a nice jolt of adrenaline, and a reminder that life is fragile.

Look both ways. The other guy may be 100% in the wrong, but that doesn't make you less dead.


Thinking about this tonight motivated me to dig out the photos from my car accident in 1994 and scan them. That time I *did* get nailed by the red-light runner, but came out of it fairly OK given the severity of the accident. I broke my collarbone on the seatbelt, which almost certainly saved me from doing a face-plant into the windshield. I broke my hand pretty badly, but made a 98% recovery from that. 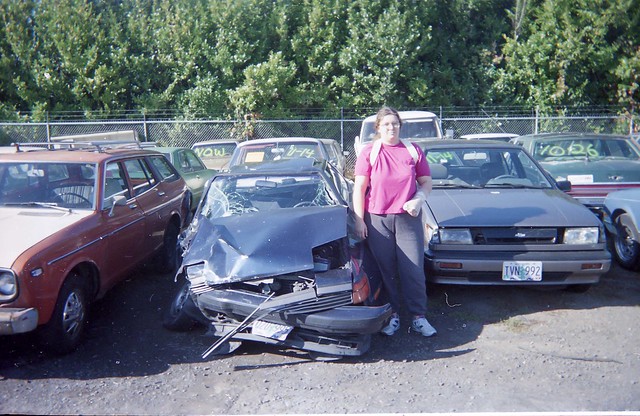