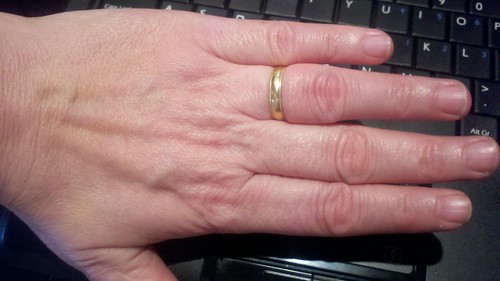 The other day I was talking to someone, and they couldn't believe that I'd been married before. I just stumbled across my old wedding ring, so here's photographic evidence. (And some even funnier evidence. I can tell how long ago it was by the fact that the ring is yellow gold. I haven't worn anything but white gold in ages... probably since I wore that ring, in fact. I'm surprised that it still sort of fits.

OK, technically that was W1D3 of C25K, but I've been going off program a bit.

I bought gloves today-- that helped quite a lot. I couldn't quite find the right fingerless gloves for what I wanted, so I bought a pair of regular gloves at REI and went all glove surgeon on them. They were excellent. I also picked up a TuneBelt to carry my phone, which seems to have solved the problem of resetting the timers. I still need headphones, though.

It's fun being out with all the dog walkers. The meat smoking company that's in the next block from me was smoking up a storm tonight, and it smelled fabulous as I went past. Someday I should really go over there and get some bacon.

My shoulders don't hurt as much tonight as they did last time. My left knee was feeling tight for a while, though. Damn, this getting old thing sucks!

After my last run I had a little chat with Google Maps and figured out how long each block in my neighborhood is. That allows me to do some simple math and figure out how fast I ran. Tonight I was mostly in the 5-6 mph range, but I did one last segment at something like 7.5-8mph. Since I did the last C25K at sub-4MPH, this is a big change.

I'm headed to Vegas later this week. The hotel as a fitness center... I think I'll take my running shoes.
Collapse