While contemplating how to spend a date... "There's (show) or (show)."

"I'm not really in the mood for passive entertainment... I want to *do* something."

"What about that new bowling alley by your office?"

"Hrmm. We could go ice skating at Yerba Buena." OK, I was mostly joking with this suggestion.

The rink was a throwback. It was nearly identical to the one that I used to skate at back in St. Louis when I was a kid. It had the same carpets, the same video games, the same benches surrounding the rink, the same rental skates, the same lockers, and the same (lack of) decor. I'm pretty sure that this place hasn't changed one bit since the 70s.

I was happily surprised to see that the rink was nearly deserted when we arrived. An older Asian man was doing slow laps with something less than competence and confidence. A perky blonde woman of indeterminate age was bouncing about, alternating with doing simple spins and the like in the center of the rink.

Disco guy was having a blast. He was in black pants and a rainbow metallic shirt. Really. It wasn't quite as gaudy as this one, but it wasn't too far off. He wore a cowboy hat with a glow stick wrapped around it, and had more glow sticks wrapped around his skates. Err, make that blades-- he was the only person in the rink wearing roller blades.

Later in the evening, hockey guy showed up. He was youngish, pony-tailed, somewhat androgynous, and wore knee pads, elbow pads, and a helmet. He seemed to be practicing for something, and my guess is that he wanted to play hockey but lacked the basic skating skills. Tom thought he was just smarter than us. "With our skills, we definitely should have been wearing helmets.

The rink had a DJ. He was a thin, African American man of indeterminate age, wearing tan fur boots, and a floor-length tan (faux) fur vest. ("Oh my god! He looks like he's wearing a dog.")

And then, us... middle-aged, overweight, out of shape, and neither one of having been on roller skates in the last three decades. Is there any way that this story can possibly end well? Really, (what) were we thinking?!

I made a deal with myself. I would consider the event a success if I managed to skate at least one full orbit of the rink without touching the side or falling, and walk out of the building under my own power. Aim high, right?

We laced up our skates, wobbled five feet to the lockers and locked up our stuff, and then practiced lurching around between the benches so that we had something to hold onto and to fall on. After a few minutes of this, I felt like I might possibly not die if I headed out into the heavily-trafficked rink. I carefully dodged both of the skaters and made my way out.

I have a memory of my mother taking my Bluebird troop roller skating when I was in first or second grade. I was a halfway-competent skater at that time, but she patiently shepherded three little girls around the rink as they took little ineffective steps and clung to the wall. For this lap, I was one of those little girls.

But... I made it! I stopped at the benches for a couple of minutes to see how Tom was doing, then went out for another lap. I almost lost my balance a couple of times, but remembered that I needed to bend my knees and keep my weight forward. OK, it's kinda like skiing. I can do that. I did. About half an hour after I arrived, I was able to sweep comfortably and relatively briskly around the rink. I wasn't graceful, and I wobbled from time to time, but my body seemed to have a vague memory of what it was supposed to do.

"You know what's going to happen? I'm going to get cocky and start showing off, and then I'm going to land on my ass." I did get cocky after a while-- I even skated an entire lap backwards! That was definitely not pretty, and I'm really glad there's no video, but I made a full orbit of the rink without falling on my ass or dying. There was a bit more wall-clinging, though.

There's photographic evidence. This one was taken just before I turned in my skates and left the rink... walking under my own power. The fact that I wasn't even limping allowed me to put a mental check mark next to "exceeded expectations".

I want to go back! 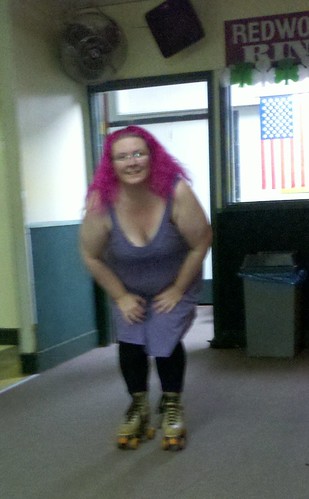