- Went to band camp
- Formed a band
- Started learning to play the electric bass
- Laid down a simple but pretty decent bass line using the three chords that our guitarist knew
- Rewrote it a couple of times to cover for her when she couldn't find the chords fast enough
- Cut music herstory class so that I didn't smack anyone
- Wrote a simple call-and-response instrumental and taught it to the guitar player
- Repeated it eleventy billion times while she learned her part
- Got up at 7 a.m. both days (WTF?!)
- Heard some fabulous music
- Kept track of where we were in our song and signaled the other band members when changes happened
- Covered for them when they didn't catch the changes
- Remembered that I like playing music
- Didn't embarrass myself too badly
- Improvised the bass part quite a lot to keep myself from getting bored
- Attended mandatory karaoke
- Performed at the Starry Plough
- Met some cool people

Things I didn't do:

It was a lot of fun, but it was also exhausting. The dynamics of the band that we formed were such that my drummer friend and I had to take charge and get it all glued together-- while I figured out what the musical foundation sounded like, the drummer whipped the lyrics into some semblance of shape. It was very much exercise in remembering that things that come easily for me aren't always as easy for other people. Still, it was a huge net win. 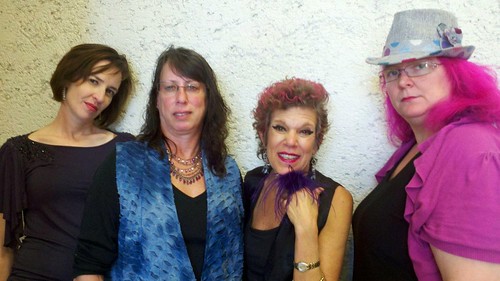