This photo is perverse 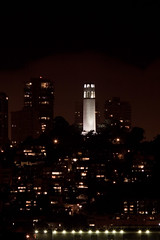 I rented a lens from RentGlass.com. Good folks, and I highly recommend them. It showed up this morning, and I briefly pulled it out of the box, went, "oooh, big expensive glass!', and put it away because I had a meeting to go to. (Yes, I'm unemployed, but I had to go meet with a potential print vendor.)

Anyway, I scampered off to my meeting, grabbed a sandwich, and came home. Just as I walked in the door, my phone rang. it was the guy from RentGlass. "I think there's a problem with your order. I think I shipped your lens to someone else, and theirs to you." I looked, and sure enough, I had the wrong $1700 lens. No problem. He'd overnight the right one to me, and I could send this one back at my leisure.

My leisure meant that I'd send it back tomorrow-- tonight I was going to go shooting with this temporary toy. I scampered out to Treasure Island tonight, although the city was not in its best form-- it was hazy, and somewhat foggy over the city. I still did my standard round of panorama shots, although I would have been surprised if any of them turned out to be worth much-- the fog created an ugly, eerie glow over the city.

And then, an idea struck. A sick, twisted, and wrong idea. I pulled my teleconverter, the really crappy off-brand one that I bought for about thirty bucks the last time I was in Vegas. I stuck it on the camera, stuck the magnificent piece of glass on the front, and shot. It's sort of like putting ketchup on beluga caviar, but sometimes you just have to do these things.