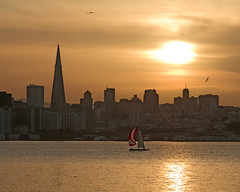 Around mid-afternoon I looked outside and thought there was a possibility of having an interesting sunset, so I did what any aspiring photographer would do-- I tossed the camera in the car and headed for a spot with a view.

I was pretty wrong about the sunset, but I did manage to catch this image. I can't decide whether I like it or I hate it, but it's the only thing worth looking at in the whole batch.

While I was out there, some TV news guy was on the island to record a segment. I listened long enough to learn that there would be 18-foot swells on the coast through tonight, then snapped a picture and headed out.

Shooting digital makes you lazy. It's really easy to just point the camera in a general direction and take a whole bunch of similar shots wherein you zoom in and out and move the camera around, but don't really think about what you're diong. Yoiu took twenty shots and nineteen suck? No prob. I find myself doing this a lot, as evidenced by a ton of pictures that I took while I was driving up the coast.

New promise to self: I'm going to stop taking pictures that I know are crappy. That will make me think about each shot before I take it.