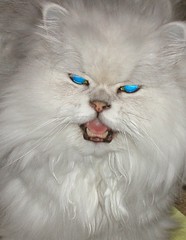 Today was not a good day.

Clarence, my darling yet aging kitty, has been slowing down for a while. Last night he read me the loud meowy feline riot act because I was in the kitchen and not giving him canned food. I did, and he only ate about half of it.

This morning when I got up we had a nice chat in the bathroom, but he seemed a little bit slower than usual. An hour or so later, when I headed for the shower, I found him on the bathroom floor having spasms. A few minutes later he was sleeping peacefully, but it was clear to me that the end had come. After a brief bit of panic I decided that since he didn't seem to be in pain I would rather let him go quietly at home than to suffer the indignity of being hauled to the vet. I stayed home from work so that I could be with him, and react quickly if he seemed to be suffering.

Farewell Clarence, Purrmonster, Stupid Furball, Squeaky Kitty, You Little Shit, Purrkit, Fuzzball, Squeakadoodle, Loudmouth Kitty. I'll miss your licking my fingers when I type, getting underfoot constantly, and shedding on everything I own. When I walk in the door you won't come running to greet me, or chew me out vociferously for having the audacity to leave you home alone. I'm sorry I didn't always keep your litter box quite up to your meticulous standards or ever skritch you enough... thanks for putting up with me anyway.
Subscribe
Comments for this post were disabled by the author